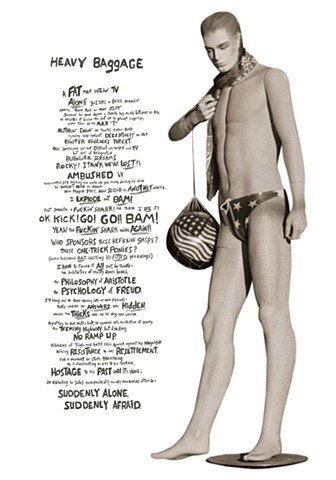 then, somewhere just past disgust with himself and TV / but shy of resignation Bullwinkle Screams / Rocky! I think we're LOST!!

AMBUSHED by / hard-nippled girls flashing him smiles and gold medals draping his neck / he doesn't hear the alarm / now fragile prey, now seized by another reverie.

I have to figure it all out, he thinks - / the subtleties of racing down lanes,

the PHILOSOPHY of ARISTOTLE / the PSYCHOLOGY of FREUD.

I'll hang out at bars making lots of new friends. / that's where the answers are hidden, where the tricks are an old dog can learn.

Regretting his puff pastry body, he squirms with frustration at seeing / the teeming highway but finding / NO RAMP UP.

Ribbons of thigh and belly skin squeak against the naugahyde / voicing RESISTANCE to any RESETTLEMENT.

for a moment he stops breathing / as if punctuating an end to his reverie, / HOSTAGE to his PAST until it's done.

on exhaling he sobs unexpectedly, the way mourners often do.