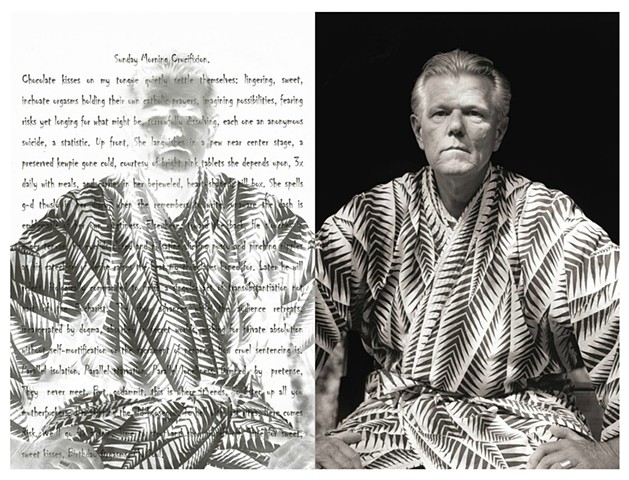 Chocolate kisses on my tongue quietly settle themselves: lingering, sweet / inchoate orgasms holding their own catholic prayers, imagining possibilities, fearing / risks yet longing for what might be, sorrowfully dissolving, each one an anonymous / suicide, a statistic. Up front, She languishes in a pew near center stage, a / preserved kewpie gone cold, courtesy of bright pink tablets she depends upon 3x / daily with meals, and carries in her bejeweled, heart-shaped, pill box. She spells / g-d thusly in her diary when she remembers to write, unaware the dash is / emblematic of her own emptiness. Elsewhere toward the back, He slouches in / queer tenure, his eyelids closed and pulsating, licking pussy and pinching nipples / as his catechism of desire raises the heat my chocolates hoped for. Later he will / relent, biologically commanded to finish a singular act of transubstantiation not / a part of the Eucharist. The show advances while the audience retreats, / incarcerated by dogma, absorbed in secret worlds, wishing for private absolution / without self-mortification or the sacrament of penance. How cruel sentencing is. / Parallel isolation. Parallel starvation. Parallel loneliness. Damned by pretense, / They never meet. But, godammit, this is where it ends. So listen up all you / mutherfuckers. I'm skipping the old hoosegow. To hell with last rites. Here comes / Risk. We'll go for a spin. Time to strut and show myself off. Time for sweet, / sweet kisses, Birthday Orgasms, My Soul.